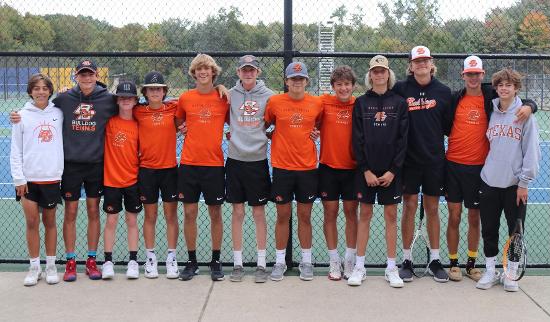 Portage, MI - Byron Center Varsity Tennis took 3rd place in the Portage Regional Thursday coming painfully close to qualifying for the state tournament again this year.  The Bulldogs had a total of 16 points (the top 2 teams qualify along with any team that scores 18 or more points).

"Multiple people have commented how tough this Regional was, and it was a great day for BC even though we didn't qualify", said Byron Center head coach Andy Ely.  "Honestly, the team has been talking about this day since last year.  They really wanted to qualify this year as we graduate 6 seniors.  There is such a bond with this team it will be hard to replace.  Every one of these guys goes to battle for one another".

Byron Center's tough 4 doubles team of Senior Captain Jack Crittendon and Freshman Ryan McKendry were the #1 seed in the tournament and had 3 tough matches.  First they played Portage Central losing the first set 3-6 before coming back to with the next two 6-0 6-3.  Next up was Mattawan in the Semi's and BC won another close one 6-3 7-5.  Finally BC played in the finals against Forest Hills Central and again after losing the first set 3-6 came back to win the next two sets 6-2 6-4 to win the flight championship.  Jack and Ryan finished the year with a record of 26-2.

Also a #1 seed was Senior Captain Ethan Wood "Woody" at 4 singles.  Ethan played meticulously beating his first round opponent Battle Creek Lakeview 6-0 6-1.  In the Semi's, he took care of Portage Central's Italian foreign exchange student 6-0 6-4.  In the Finals he was pitted against Mattawan where Ethan got up 5-2 before the Mattawan player retired with leg cramps (reminiscent of Ethan's State Finals Match last year against Okemos) giving the flight championship to Woody who finished the season undefeated at 28-0.

Thank you very much to all the parent helpers and all our fans that made this season so special.  We really appreciate everything you have done for this team!

Come give a shout out and watch the BC Tennis team in the Homecoming Parade at 5:30pm today!!

Results were as follows: